One night last week I had a terrible dream. My little daughter and I were walking on giant rusty bridge high above a seaway. [1] We went too close to the edge and fell to our deaths.

Dreams (never mind waking life) can be slippery and unfixed, but I find it almost impossible not to assign a meaning to this one: that the future for my daughter may be catastrophe. The previous day I had read an article about evidence of rapid climate change in the Arctic, and it struck me more than such things usually do. [2]

We have long known, if we have been paying attention, that scientists studying earth systems and climate change believe there are significant risks of changes with potentially dire consequences. We have long known that these risks include positive feedbacks, including a rapid release of methane. [3] And we have known for nearly two years that a recent increase in atmospheric concentrations of methane could be a sign of that particular feedback kicking in. We have long known that rapid and effective action to reduce and (quite soon) eliminate emissions is the only sensible option. But this particular article shook me deep down.

But other thoughts arise: Isn’t this optimism of the will actually just another form of denial? [5] Much of human history suggests that - however wise some institutions and individuals may be, societies are very poor at anticipating and heading off complex and intractable dangers they cannot immediately see. Greed and short term thinking are so deeply embedded in the way we organize and are organized that nothing will shift them in time. The solutions don’t have a hope, whispers a little voice. We’re not going to get our act together, [6], [7] and even if we do it may be too late. Terrible suffering and death is coming, and this actually means you and all you care about. [8] The idea that we have moved beyond the worst horrors that the 20th century could throw at us such as genocide and the threat of nuclear annihilation is going to prove laughable.

I have pretended to be mostly hard-boiled, less-deceived [9], at least when not feeling bewildered by low-level indifference and stupidity, rage at those who tell the big lies and do the big crimes, or self-disgust that I am not doing more to make things better. But there has usually been an element of distance in this: the wrong end of the telescope, the sound muffled by water.

Now, it seems, the 'lessons' of the great tragedies which a duffer like me studied long ago may actually apply to us, to me. I would not mind too much if that was just for myself, but I'm not sure I can stand it for my little daughter [10], who I love more than I can say and who ties me to life and the future in a way I cannot escape. [11]

So here we stand, perhaps close to the brink of catastrophe, carrying on as if it was not there. I plant seeds and listen to the spring birdsong.

[1] It resembled the Menai, a symbol of the first industrial age and itself built about 50 years after The Iron Bridge and more than 100 years after the Atmospheric Engine. I had this dream a few days before the news came through of the collapse of an ice bridge in Antarctica.

[2] Arctic meltdown is a threat to humanity by Fred Pearce, New Scientist 25 March 2009, is a short feature, well put together. Pearce has form as reporter and author of several books on climate change, water and other issues. The article begins:


"I am shocked, truly shocked," says Katey Walter, an ecologist at the University of Alaska in Fairbanks. "I was in Siberia a few weeks ago, and I am now just back in from the field in Alaska. The permafrost is melting fast all over the Arctic, lakes are forming everywhere and methane is bubbling up out of them."

Back in 2006, in a paper in Nature, Walter warned that as the permafrost in Siberia melted, growing methane emissions could accelerate climate change. But even she was not expecting such a rapid change. "Lakes in Siberia are five times bigger than when I measured them in 2006. It's unprecedented. This is a global event now, and the inertia for more permafrost melt is increasing."...

[3] See also CO2 rise continues, but check out methane and
Methane prime suspect for greatest mass extinction. Feedbacks, or tipping points, are thought to be a risk. Not everyone agrees they are certain. See debate.

[4] A typical recent example is A Self-Fulfilling Prophecy by George Monbiot. Guy Dauncey’s new blog is yet another brave effort in the solutions vein. I spent more than fifteen years working on such things myself. [Added 16 April: see, too, Facing Climate Change. Thanks VS for this link.]


On May 15th Henry Waxman and Edward Markey, the Democratic point-men on climate change in the House of Representatives, unveiled a bill that would give away 85% of carbon permits for nothing, with only 15% being auctioned. The bill’s supporters say this colossal compromise was necessary to win the support of firms that generate dirty energy or use a lot of it, and to satisfy congressmen from states that mine coal or roll steel.

[7] Another thought: what if the best scientists are wrong, not because the so-called skeptics (who are fraudsters, fools and criminals) are right but because the science turns out to have been more complex than foreseen, with results that somehow turn out to be more benign, or because there do turn out to be get-out-jail-free cards such as energy-related and/or geo-engineering technologies that deliver much more than they destroy?

[8] Schellnhuber contemplates a human population reduced to about one billion. James Lovelock talks about a 'cull'.

[10] Concluding a review of The Road by Cormac McCarthy, Michael Chabon writes:


What emerges most powerfully as one reads The Road is not a prognosticatory or satirical warning about the future, or a timeless parable of a father's devotion to his son, or yet another McCarthyesque examination of the violent underpinnings of all social intercourse and the indifference of the cosmic jaw to the bloody morsel of humanity. The Road is not a record of fatherly fidelity; it is a testament to the abyss of a parent's greatest fears. The fear of leaving your child alone, of dying before your child has reached adulthood and learned to work the mechanisms and face the dangers of the world, or found a new partner to face them with. The fear of one day being obliged for your child's own good, for his peace and comfort, to do violence to him or even end his life. And, above all, the fear of knowing—as every parent fears—that you have left your children a world more damaged, more poisoned, more base and violent and cheerless and toxic, more doomed, than the one you inherited. It is in the audacity and single-mindedness with which The Road extends the metaphor of a father's guilt and heartbreak over abandoning his son to shift for himself in a ruined, friendless world that The Road finds its great power to move and horrify the reader.

[11] See, for example, this from Waterland by Graham Swift:


The Here and Now, which brings both joy and terror, comes but rarely - does not even come when we call it. That’s the way it is: life includes a lot of empty space. 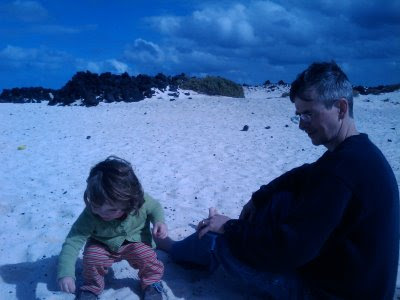 My babe so beautiful ! it thrills my heart
With tender gladness, thus to look at thee

P.S. 14 April: World will not meet 2C warming target, climate change experts agree and To stop a climate catastrophe we must first believe we can make a difference.
Posted by Caspar Henderson at 5:56 am