Manifestos with bold aims sometimes echo down the years in irony, satire and farce. [1] Disorganising on the streets of Paris in the 1960s, the Situationists took the slogan "Workers of the world, Unite!" from Marx and Engel's 1848 mother of all manifestos and turned it into "Workers of the World, Disperse!". Two decades later huge crowds in Moscow marched under the banner, "Workers of the World, We apologize!" [2]

Today sees a launch event for the Dark Mountain project, a "literary movement for a time of global disruption." In its manifesto, project curators Paul Kingsnorth and Dougald Hine weigh in against "the civilising project, which has become the progenitor of ecocide" [3] and in favour of "a non-human perspective...which sees us as one strand of a web rather than as the first palanquin in a glorious procession."

Having spent the last year or two trying to better understand and write about the momentous extinctions and creations of the Anthropocene (and having been around gloom for a while longer [4]), I sympathize with much of what is said in the manifesto. [5] I will follow the project with interest but with these provisos in mind:

A) There is already a lot of dark work out there in both in literary and popular culture, stretching back to at least Han Shen. [6]

B) There are limits on the ability for most humans most of the time to break out of the "bubble" of distorted perceptions. The bubble just changes shape. It may even be that the most we can know is that, in certain respects, we are always in a bubble of illusion. [7]

C) When Gandhi was asked what he thought of Western civilisation he replied "it would be an excellent idea". In that spirit, I think the need is for different civilisation, not uncivilisation. We need to engage in politics and a struggle for justice for the majority who for decades to come are likely to live and die in cities (and megaslums like those of Lima, Manila and Lagos). It is they who may play the largest role in determining what happens to the world. Only a lucky few can "head for the foothills". As we enter a valley that may be darker even than the 1930s, not everyone who talks about democracy will be, in Robinson Jeffers's phrase, a dupe. [8] 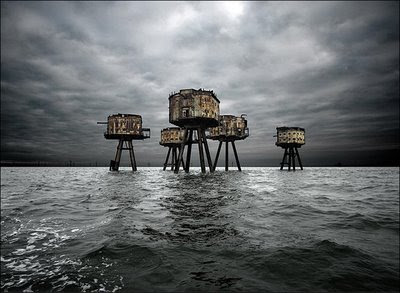 [1] In Hendrik Hertzberg's account, Sarah Palin's declaration/manifesto of independence may seem like farce, but -- with, say, the support of News International -- it could yet lead to tragedy.

[2] Long before the Situationists, writes Andrei Codrescu in The Posthuman Dada Guide, the first Dada soiree in July 1915 included a sendup of The Communist Manifesto which concluded "Workers of the World, Go Dada!". But the (anti) artists soon found themselves outdone by reality. Codrescu notes:

In the winter of 1915, an estimated 120,000 French soldiers were killed in a single brief offensive (against the Hindenberg line, 150 miles from Paris ) and a serious mutiny ensued. One of the most striking events of that dark time was the procession of a group of infantrymen through a town, baaing like sheep, to protest that they were being led like lambs to the slaughter.

A case of "Workers of the World, Go Baa Baa!", perhaps.

foundations... of coal, oil and gas -- millions upon millions of years of ancient sunlight, dragged from the planet and burned with abandon...on top of all the unseen layers on a well tended surface are you and I: unaware or uninterested, in what goes on beneath us; demanding that the authorities keep us in the manner to which we have become accustomed; occasionally feeling twinges of guilt that lead us to buy organic chickens or locally produced lettuces.

There is an allusion here, conscious or not, to George Orwell (The Road to Wigan Pier):

...Under the capitalist system, in order that England may live in comparative comfort, a hundred million Indians must live on the verge of starvation--an evil state of affairs, but you acquiesce in it every time you step into a taxi or eat a plate of strawberries and cream.

[4] See for example, Whatever happened to Gaia?, written some time before Lovelock's most pessimistic pronouncements and before the risk of catastrophic climate change was as widely entertained as it is today.

[6] Some consider Cormac McCarthy's The Road a defining text (see Michael Chabon's commentary), but the literature goes much wider and, arguably, mainstream horror movies like 28 Days Later inhabit some of the same territory. For gluttons, see my essay on climate change, imagination and culture (parts 1, 2 and 3 ) and a short note on the new new nature writing. One ancient Chinese poems goes like this:

Everyone who glimpses Cold Mountain
starts complaining about insane winds,
about a look human eyes can't endure
and a shape nothing but tattered robes.

They can't fathom these words of mine.
Theirs I won't even mention. I just tell
all those busy people bustling around:
Come face Cold Mountain for a change.

[7] See, e.g., Making up the Mind: How the Brain Creates our Mental World by Chris Frith. See also the Diamond Sutra:

Thus should one view all of the fleeting world - a drop of dew, a bubble in a stream, a flash of lightning in a summer cloud, a star at dawn, a phantom, and a dream.

[8] See Eno on The feeling that everything is going to get worse, Ehrlichs on The return of the population bomb.

Image: Maunsell Forts in the Thames Estuary
Posted by Caspar Henderson at 6:43 am