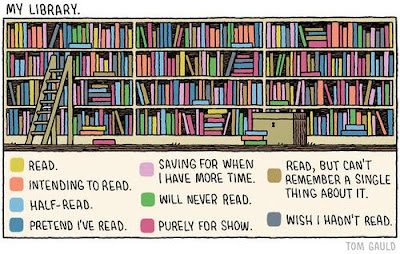 Instead, here is an un-list of some of my tsundoku:  books I wanted to read this year and still haven’t got around to:

The Ends of the World: Volcanic Apocalypses, Lethal Oceans and Our Quest to Understand Earth’s Past Mass Extinctions by Peter Brannan

The Rise and Fall of the Dinosaurs by Steve Brusatte

The Meadow by James Galvin

Aristotle’s Way: How Ancient Wisdom Can Change Your Life by Edith Hall

Everything Under by Daisy Johnson (and all the other Booker shortlisted books I didn't manage; I only got as far as The Overstory by Richard Powers)

The Nobel Factor: The Prize in Economics, Social Democracy, and the Market Turn by Avner Offer and Gabriel Söderberg

Chernobyl: History of a Tragedy by Serhii Plokhy

Radical Markets: Uprooting Capitalism and Democracy for a Just Society by Eric Posner and Glen Weyl

The Archipelago of Hope: Wisdom and Resilience from the Edge of Climate Change by Gleb Raygorodetsky

Communal Luxury: The Political Imaginary of the Paris Commune by Kristin Ross

The Finance Curse by Nicholas Shaxon

Among the books on my unread list that I have finally got started on are:


The Library of Ice by Nancy Campbell

Frankenstein in Baghdad by Ahmed Sadaawi

They’re very good.  I am also reading a proof of Robert Macfarlane’s Underland, which will be published in the spring of 2019. It is very very good. Among other books on my horizon are Doggerland by Ben Smith and Reef Life by Callum Roberts.

What else should I be reading?
Posted by Caspar Henderson at 11:38 am