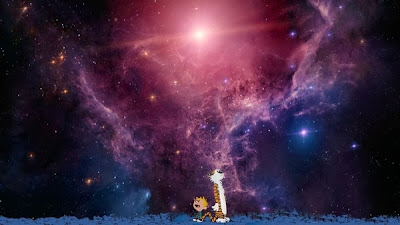 Online in The Guardian today: a review of Five Billion Years of Solitude by Lee Billings. Here are some notes and links, and my original ending.


Astronomers have mapped the clouds on a planet 1,000 light years away. See here.

Some indications of what is going on in Gregory Laughlin's head can be found here and here.

Since the book was published Sara Seager has received a MacArthur award.

A question facing all of us...Like many who reflect on the prospects for life in the universe, Billings turns back towards Earth with a heightened sense of how marvelous life on this planet is, and how worthy of attention and care.  Perhaps this turn needs a name if it doesn't already have one.  It is not the opposite of a Copernican turn (in which, discovering the Earth to be just a small planet orbiting a star rather than the centre of the universe we "downgrade" its importance) but a necessary transformation or extension of it.

David Grinspoon writes that we need to search for planetary intelligence, not intelligent life.

See also this Barely Imagined Beings post from earlier in the year.

David Deutsch stresses that...our ignorance is still infinite. Deutsch also suggests that this means there will never be an end of new frontiers. Paul Gilster has written No scientific era has has succeeded in imagining its successor...We have no analogues in our experience for what advanced [interstellar] cultures might create.


...Mr Palomar returns from his reverie to the normal run of life only to find that he is as vulnerable to muddle, hesitation, blunders and anguish as ever before. Better, and maybe more attainable than it seems, is the state Thoreau experienced when he wrote “Time is but the stream I go a-fishing in. I drink at it; but while I drink I see the sandy bottom and detect how shallow it is...I would drink deeper; fish in the sky, whose bottom is pebbly with stars. I cannot count one. I know not the first letter of the alphabet. I have always been regretting that I was not as wise as the day I was born.”

A poet whose name translates from Chinese as Summit-Gate didn't even need words. Taking refuge from the madness and grief of her times in a small house on windy ridge line, she would collect dry leaves every autumn, selecting them for their delightful and evocative shapes, and store them in special boxes on bookshelves in her library. After she had filled all the shelves, Summit-Gate would wait for the first snowfall and then release the leaves, one at a time, to tumble, skid and scratch across the snow before soaring into emptiness.

Posted by Caspar Henderson at 10:04 am